A trio of former care homes within a mile of each other in West Bromwich will all go under the hammer at the next Bond Wolfe Auctions online auction at the end of this month, with combined guide prices* in excess of £1.5 million.

McLaren House, St Andrew’s Court and Rowena Court are each listed separately in the brochure for the upcoming auction, on 31 March, along with 223 other lots from across the UK covering everywhere from Cornwall to Northumberland and with guide prices ranging from £nil to £850,000.

Ian Tudor, managing director of Bond Wolfe Auctions, said: “All three properties are attractive and well maintained and we believe – given planning permission – they could be converted for a variety of residential uses, such as flats or HMOs – homes of multiple occupancy. 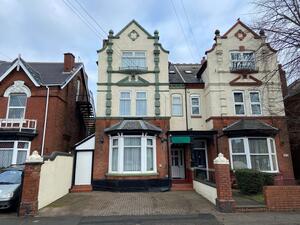 “Alternatively, each would make an ideal large family home.

“Given the highly attractive guide prices for each individual property we are expecting considerable interest from potential bidders both from across the UK and abroad.

“Our last online auction in February saw a staggering 3,500 people logging on to watch proceedings and bid during the day. Our use of the internet has opened our auctions up to a global audience and UK properties like these three former care homes are in the sights of a growing number of British and international investors.”

The largest of the three properties – St Andrews Court at 53 Beeches Road – was formerly a 14-bedroom care home and is listed with a guide price of £750,000+.

Extending over three floors with bedrooms, bathrooms, WCs and activity rooms, it also features a large well-tended garden at the rear and a Minton floor in the hallway.

Substantially extended, the semi-detached three-storey house still has many of its original features both outside and inside.

As well as a cellar, it has a conservatory and lounge as well as bedrooms, showers, bathrooms and an enclosed garden to the rear.

Rowena Court, at 12 Beeches Road, is listed with a guide price of £385,000+ and is a converted end-terrace home which served as a seven-bedroomed care home.

Well maintained and attractive, the three-storey property includes a well-built single storey extension at the rear where there is a walled courtyard garden.

All three will go under the hammer at Bond Wolfe Auction’s next online auction on Wednesday 31 March.

Mr Tudor added: “The figures speak for themselves. Our auctions continue to grow in size and we now have global as well as national reach.

“Moving to online, live-streamed auctions has opened up our catalogue to buyers who would never have attended a one day physical auction in Birmingham.”

The company is already seeing strong demand for Bond Wolfe Auctions’ next auction, which once again starts at the earlier than usual time of 8.30am on Wednesday 31 March.

The auction will be livestreamed via Bond Wolfe Auctions’ website with remote bidding by proxy, telephone or internet only.