Victorian pub in Staffordshire with planning at auction for £210k+

Competitive bidding is expected when a Victorian pub on a back street corner plot in Staffordshire appears at Bond Wolfe’s next auction on 21 July where a record 250 lots will go under the hammer. 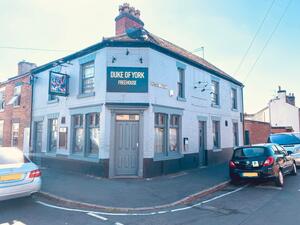 The Duke of York at 27-28 Victoria Street in Burton-on-Trent, which has plenty of land to the rear and comes with planning approval to convert into nine apartments, has a guide price* of £210,000+.

There are alternative plans for retention of part of pub building as a micro bar, with the remaining premises becoming eight apartments.

Bond Wolfe director James Mattin said: “The Duke of York was a prominent public house in a stylish building and could either become a popular set of self-contained apartments or a micro bar and apartments, with planning for both these options already available.

“But potential buyers may have other ideas, and the location could be just as suitable for other commercial uses, such as retail shop, a takeaway, a shisha bar, a pharmacy or another business, subject to obtaining any necessary planning consents.

“The Duke of York lies at the corner junction of Victoria Street and Edward Street, around 0.75 miles to the north-west of Burton town centre.

“There are various nearby uses including a garage opposite, with a school and churches nearby, but the main immediate vicinity is made up of traditional residential terraced streets.”

The Duke of York, a freehold property with vacant possession available on completion, is just one of a record 250 lots listed for Bond Wolfe’s next auction which starts at 8.30am on Wednesday 21 July.

The auction will be livestreamed via Bond Wolfe’s website with remote bidding by proxy, telephone or internet only, and bidders must pre-register no later than 12 noon on Tuesday 20 July.