Power of auction shines through for sellers with Auction House London

Buyers were out in force for the Auction House London sale on 3rd March, with many properties selling well above reserve prices and expectations.

The additional sale date for March was laid on by auctioneers, following high demand from buyers and sellers at the start of 2021. Last week,  55 lots were sold at a success rate of 80%, raising more than £16m pounds (£16,266,300). This property in Abbey Wood, south east London - untouched since its private treaty sale in October 2020, sold at £355,000, considerably more than its selling price last year.

Director and Auctioneer, Andrew Binstock, said, “This shows the power of competitive bidding at auction when you get at least two buyers interested in one lot. Nobody wants to be the underbidder, potentially losing the property for a few hundred pounds. What’s more, sale by private treaty can take up to three months, but selling at auction can be completed in just over three weeks!”

Elsewhere, this semi in Mill Hill, north west London, attracted a lot of interest from buyers looking for a property with potential. Trapped in something of a timewarp, this property needing total refurbishment, sold at £523,000. 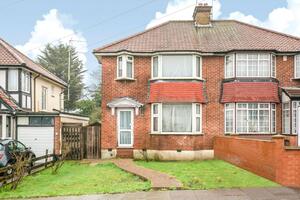 Another highlight of the sale was at the back of a property in Sheen Lane, Mortlake, south west London, where the potential to convert the building into a two bed mews house proved irresistible to bidders, and sold at £361,000.

Andrew Binstock added, “We had some exceptional results this time. Our sellers love the fact that some lots went for higher prices than comparable properties being sold by estate agents. And the certainty of sale at auction means it still remains one of the only ways to guarantee completing on a property purchase before the Stamp Duty holiday comes to an end – even with its new extension until the end of June.”