A 16th century servant’s house built near the Royal town of Sutton Coldfield is appearing at Bond Wolfe’s next auction on Wednesday 14 December, with a guide price* of just £1. 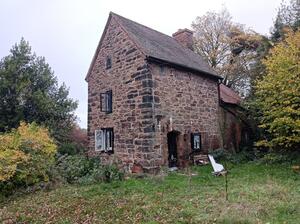 The tall and narrow High Heath Cottage on Withy Hill Road, once known locally as “Mutton’s Castle”, is located between Moor Hall Hotel and Bassetts Pole.

Now Grade II-listed, the property is one of a number of stone houses of a kind not found anywhere else in England and was built by John Harman, who became Bishop Vesey, a keen local benefactor.

Bishop Vesey is said to have built more than 50 of these stone houses in the 1530s to house his servants, who would also keep order in outlying areas of his native Sutton Coldfield.

High Heath Cottage is the smallest of the surviving stone houses and is made of three storeys connected by a stone spiral staircase, with just one room on each floor and a massive chimney.

The Sutton Coldfield Local History Research Group has described how the cottage was easy to defend from attack, originally having only one ground-floor window.

One of the historians has written: “There is a local tradition that a man who had stolen a sheep barricaded himself in the cottage – this at a time when sheep-stealing was a hanging offence.

“He is supposed to have held out for a considerable time, and so the cottage used to be known locally as ‘Mutton Castle’.”

Gurpreet Bassi, chief executive at Bond Wolfe, explained that the reason for the nominal guide price was the fact that the detached building has fallen into disrepair and would require substantial investment to renovate.

He said the property was built in an isolated spot once surrounded by the open commons of High Heath, but today stands alone in the middle of hedgeless farmland.

Mr Bassi said: “This property has a fascinating history and the appearance of a mini watchtower, looking out across the valley to a lonely stretch of the old coach road from Coleshill to Lichfield, now the A446, where highwaymen could lurk.

“By the 19th century, the cottage was part of the Moor Hall Estate, and there was once a row of three cottages adjoining it, occupied by farm labourers in 1851.

“But the adjoining cottages fell into disrepair, and the present-day High Heath Cottage stands alone in the landscape much as it did nearly 500 years ago.”

He added: “This three-storey property is suitable for development but requires refurbishment and modernisation within the Grade II* building and green belt regulations, as well as the usual planning permission.”

High Heath Cottage is located north of Withy Hill Road and is surrounded by farmland, near to the Little Ripley Day Nursery and around two miles from Sutton Coldfield town centre.

There are two rooms on the first floor and one on each of the second and third floors, with a fireplace on each floor and garden areas to the front, side and rear.

High Heath Cottage is among scores of properties due to appear in Bond Wolfe’s next auction which is due to start at 9am on Wednesday 14 December.

The auction will be livestreamed via Bond Wolfe’s website with remote bidding by proxy, telephone or internet.