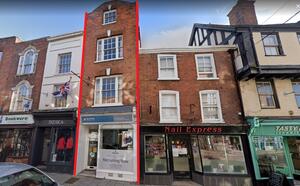 The four-story freehold investment at 152 High Street is noted by Historic England as a “lofty, narrow-frontage house” which is a “characteristic example of late 18th century refacing” on an earlier building.

The property, which has Flemish-bond brickwork, a nine-pane sash window and shaped gable with fluted keystone and cornice, comes with a guide price* of £168,000+.

Young Gloucestershire Ltd, a countywide charity that supports disadvantaged young people, is renting the property on a five-year lease until June 2027 at an initial rent of £7,500 per annum until December 2022, rising to £15,000 per annum thereafter.

He said: “This Grade II-listed commercial property is spread over four floors with additional basement storage.

“It occupies a prominent position along the main High Street in the historic riverside market town of Tewkesbury, a market town dating back to the 7th century with a population of over 10,000 people.

Mr Mattin added that Tewkesbury is nine miles north of Cheltenham and 11 miles north of Gloucester, with the nearby junction 9 of the M5 motorway junction giving swift access to Birmingham, 45 miles away, and Bristol, 48 miles away.

Ashchurch Parkway railway station is around two miles away and connects to Birmingham, Bristol and Cardiff.

The Tewkesbury property is just one of 158 lots due to appear in Bond Wolfe’s next auction which is due to start at 9.30am on Thursday 27 October.

The auction will be livestreamed via Bond Wolfe’s website with remote bidding by proxy, telephone or internet.