A Grade II listed Georgian country house near Stourport-on-Severn is set for a fresh lease of life when it comes up for sale with Bond Wolfe on Wednesday 21 July. 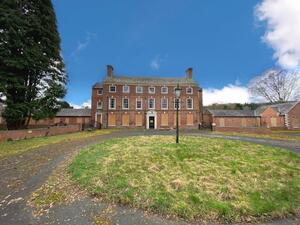 Lickhill Manor has been a family home for most of its 300-year history but has also been used as a maternity hospital and, most recently, a care home. But it has been empty for nearly a decade and is now listed for auction with a guide price of just £455,000+.

That could be a bargain for its new owner, who could return it to use as a luxurious family home or convert it into apartments or any leisure or business uses – subject to planning permission.

Ian Tudor, joint managing director of auctions at Bond Wolfe, said: “It’s not often you see such a beautiful historic property come up for auction, and we are expecting intense interest from bidders both in the UK and from overseas. Whatever the future holds for Lickhill Manor, it will require modernisation and renovation work, hence the extremely competitive guide price.

“The new owner will possess a classic Georgian country house that retains many original features. It presents a unique opportunity.”

Lickhill Manor is thought to have been built originally around 1700, for the Folliot family, but was substantially extended in the late 17th or early 18th century, when it acquired its classical Georgian frontage.

It had been abandoned by the 1930s but during the Second World War was used as a maternity unit for women from Birmingham, as a refuge from the wartime bombing. Among those born at the unit, on 29 December 1941 was Ray Thomas, a founding member of rock group, The Moody Blues.

It then became a hotel until it was bought as a family home in the 1950s. It was later converted into a care home which closed down in 2012.

The manor house is partly surrounded by the 65-acre Lickhill Manor Caravan Park. It stands in its own grounds beside the River Severn, accessed via a shared private road.

The property’s main building has been extended with two single storey wings on either side and the ground floor currently includes 15 ground floor bedrooms, along with two sitting rooms, a dining room, kitchen, staff rooms, communal bathroom and boiler room, with staircases and a lift. There are a further eight bedrooms and bathrooms on the first floor while on the second floor are two storerooms and another 12 bedrooms, as well as more bathrooms.

Among the interior features are panelled rooms and an early 18th century staircase as well as armorial glass in the stair windows dating from the late Victorian period when it was owned by the Crane family, whose monograms appear in painted plaster on the ceiling.

Lickhill Manor is just one of 247 lots listed in Bond Wolfe’s next auction which starts at 8.30am on Wednesday 21 July.

The auction will be livestreamed via Bond Wolfe’s website with remote bidding by proxy, telephone or internet only, and bidders must pre-register no later than 12 noon on Tuesday 20 July.