A substantial Victorian town house in Leamington Spa is set to see competitive bidding at Bond Wolfe’s next auction on Thursday 27 October. 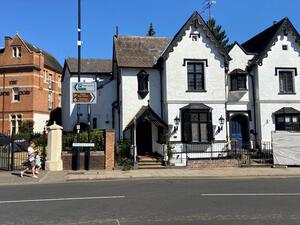 The four-bedroomed property at 1-1A Spencer Street, which benefits from planning permission to create a five-bedroomed house of multiple occupation (HMO), has a guide price* of £675,000+.

The freehold lot is in a central location fronting Spencer Street, near to where it merges with Avenue Road, and is within easy walking distance of shops, bars and restaurants in The Parade.

Ian Tudor, joint managing director – auctions at Bond Wolfe, said: “We are expecting competitive bidding for this attractive town house of great character dating from the early to mid-19th century.

“On the first floor there are three bedrooms, a dressing room and the main family bathroom, while the second floor has a large double bedroom with ensuite bathroom.

“The property has the benefit of planning permission to form a five-bedroomed HMO.

“In the basement, and with access from the street or rear garden, is a very well-presented apartment at 1a Spencer Street equipped with a kitchen, generous open-plan sitting/dining room, attractive bathroom, separate toilet and double bedroom.

“There is an option to incorporate this basement apartment into the main house, with the creation of an additional stairwell.”

The property has a good-sized rear garden and is located close to Leamington Station, with easy access into London Marylebone and Birmingham.

There is also good access to the national motorway network via the nearby M40 and M42.

This investment opportunity is one among scores of lots due to appear in Bond Wolfe’s next auction which is due to start at 9am on Thursday 27 October. The auction will be livestreamed via Bond Wolfe’s website with remote bidding by proxy, telephone or internet.