More than one thousand bidders took part in the mammoth livestream auction led by auctioneer and director of Auction House London, Andrew Binstock. 115 lots were offered with 90% of stock selling.

The auction got off to a fast impressive start with Lot 1 setting the pace. The modern 5 bedroom terrace in Colindale, north west London needed a little updating and was guided at £250,000. Two tenacious bidders pushed each other hard until it sold at £400,000.

As always, properties with development potential were popular with buyers and this six bedroom end terrace in Darville Road, Stoke Newington was no exception (pictured below). Needing total refurbishment, it started with a guide of £850,000 and eventually sold for £1,165,000. 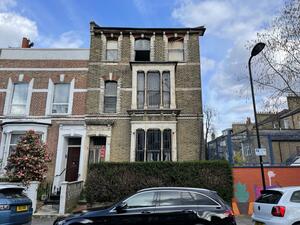 Andrew Binstock, said, ‘It was an exciting auction full of endless bidding wars, some of which went on for more than ten minutes. The market is booming and there continues to be an insatiable appetite for property from buyers. It seems as if people are making hay while the sun shines. No one knows how long this will go on for but it’s a brilliant time to sell.’

There were plenty of great sales on the day. Another highlight was this shop and two studio flats in Croydon, guided at £250,000, which sold after something of a bidding battle at £350,500.

Auction House London is now taking entries for its next sale on Wednesday 16 June, at 12 noon, which is being streamed live.