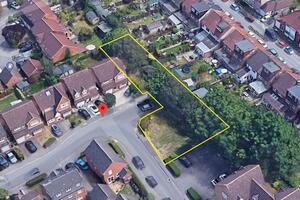 Lot after Lot attracted large numbers of serious bidders with many of the 129 properties listed, selling considerably above reserve prices. 87% of lots sold, with land were a highlight of this auction, where parcels both, with and without planning permission created strong competition between buyers.

In Sunbury on Thames, Middlesex, a rectangular piece of land with planning in place for a two bedroom detached house, was guided at £50,000, before finally selling for almost four times that at £198,000.

Land without planning proved equally attractive to bidders. In Wynches Farm Drive, St Albans, Hertfordshire, this parcel (pictured), measuring almost 0.2 acres has potential for development. It was guided at £80,000 and sold for more than double that guide at £205,000.

Auctioneer and director of Auction House London, Andrew Binstock, said, “More than a year after the first lockdown and the market remains extremely buoyant with no sign of lessening off. This is partly due to the break from stamp duty, but also the fact that land and property outside of London remains in high demand.”

Andrew Binstock, said, “Inevitably, the current enthusiasm from buyers will lessen off eventually, but at the moment it’s a sellers’ market and a good time to auction property. Online selling will always continue in some form and we’re unlikely to be back in a real auction room before September and even when we are, we’ll be accepting internet bids as well as those from the room.”

Auction House London is now taking entries for its next sale before the summer break, on Wednesday 28 July, at 12 noon, which is being streamed live.