Auction House London warns there are clear signs the property market is cooling off with the economic uncertainty.

Auctioneers at Auction House London say the number of bidders taking part in auctions has dropped fast over the last four months. At its recent sale (Wednesday 26 October 2022), the number of bidders was down by 300. Despite this change the sale was a success raising more than £26m (£26,050,000) with 80% of lots sold.

Auctioneer and Director of Auction House London, Andrew Binstock said, “Although some lots had to be withdrawn at the last minute due to lack of interest the bidders taking part are intent on buying. We had a good volume of lots to start, so there was plenty of action and it resulted in a successful day. Many lots are still selling above the reserve agreed with our sellers.”

One highlight of the recent Auction House London sale included an end of terrace three-bedroom house in Courtney Road, Grays, south Essex (pictured) needing refurbishment. It was guided at £175,000 before selling for £289,500 after some intense bidding. 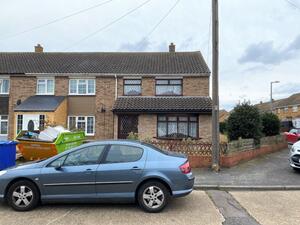 Andrew Binstock continued, “The number of bidders has been down by hundreds of people from our sales in the summer of 2022, but interest and bidding is fierce for Lots with potential.”

Lot 5, a three-bedroom end of terrace house on Brampton Road, Kingsbury, northwest London, NW9, was another property which sold at more than £100,000 above its guide and reserve. Bidding began at £400,000 before it sold for £562,000. It needed updating and came with off street parking.

Andrew Binstock added, “It’s been a turbulent few weeks for the economy with things changing every day. This must have had an effect on the confidence of buyers and we’re now hoping it will settle down. There will always be properties needing to be sold and buyers in a good position to bid.”