Auctioneer and Director of Auction House London, Andrew Binstock conducted the major part of the auction, personally being on the rostrum for 9 hours. The longest ever single sale by the team on Wednesday 3 August 2022, also had its highest number of lots sold by Auction House London in its history, with 157 of the 174 selling.

Andrew Binstock said, “Our August sale has been phenomenal and good lots with potential are still selling wildly well. It’s too early to judge how the rise in interest rates will affect the auction property market but Lots where buyers can see an investment, remain in high demand, and are selling well above reserve prices agreed with sellers.”

Lot 1 fired the Auction House London August auction off to a strong start. In Francis Avenue, Bexleyheath, south London a three-bedroom detached bungalow with the possibility to extend was guided at £275,000 and sold at £446,000. And in Hanworth Road, Whitton, Middlesex a two-bedroom flat sold for more than double its reserve and guide price of £125,000 for £253,000. It had 33 years left on the lease and a chance to extend.

Andrew Binstock continued, “There is talk of property prices slowing down. At the moment, there is little sign of that in the auction market but it’s a waiting game. While there are sellers willing to sell good options with potential there’ll be buyers looking to invest in property, which has always proved a robust bet.”

In the Isle of Dogs, this three bedroom semi in Thermopylae Gate (pictured), needing total refurbishment generated a lot of competition. It was guided at £500,000 before the hammer came down at £760,000. 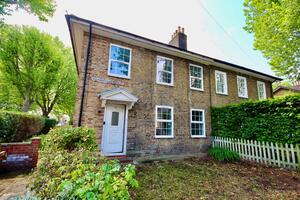 Auction House London is now taking entries for its next livestream sale on Wednesday 14th September.